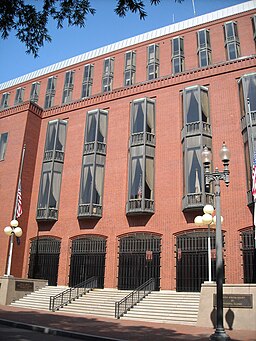 A $400 million class action lawsuit was filed Monday in the U.S. Court of Federal Claims against the Broadcasting Board of Governors over personnel and contracting practices overseen by top agency officials in recent years. The plaintiffs, several Voice of America (VOA) workers, allege that the U.S. government-funded, international news broadcaster’s Board of Governors denied proper pay and benefits to VOA employees intentionally misclassified as independent contractors by agency officials, Law360 website reported.

As reported by Law360, plaintiffs in the latest class action lawsuit allege that the Broadcasting Board of Governors has implemented a system of using “Purchase Order Vendors” (POVs) “for services indistinguishable from those of direct employees, to avoid a 30 percent budget increase from providing the lawful wages, paid leave, workers compensation, and tax contributions the workers are owed.”

“The BBG put the plaintiffs and class members on purchase orders so it could extract their faithful service to the United States while avoiding payment of the more substantial compensation that is owed to federal employees,” the complaint states.

“While Congress authorized BBG to acquire personal services from a maximum of 60 independent contractors, the board exceeded that number “by a factor of 10,” Law360 article reported.

As reported earlier by BBG Watch, some of the officials running the agency in recent years who were responsible for contracting practices have seen their authority and duties enhanced last week by new BBG CEO John Lansing who promises to transform the agency but opposes a key structural reform supported by Republicans and Democrats in the House Foreign Affairs Committee. Members of Congress have repeatedly warned the BBG board about many of the management practices outlined in the latest class action suit.

While the BBG has been hit with many employment related lawsuits in recent years, the new $400 million class action comes close in the amount of money which was sought and won by plaintiffs in the Hartman gender discrimination case filed by women who were denied employment by VOA and BBG’s predecessor agency, USIA. After many years of litigation, the agency eventually agreed to settle the Hartman case in 2000 at a cost to U.S. taxpayers of over half a billion dollars ($508 million).

In announcing the settlement of the Hartman case, the Broadcasting Board of Governors stated in 2000 that “it underscores the continuing need for effective mechanisms and procedures to ensure that discrimination does not occur, that equal opportunity does exist, and that a case such as Hartman can never happen again.”

Last year, the BBG lost another employment lawsuit over the 2009 illegal RIF (reduction-in-force) of Office of Cuba Broadcasting (OCB – Radio and TV Marti) employees. Some agency officials wanted to challenge the court ruling but were overruled by BBG chairman Jeff Shell. Those OCB employees were given back their jobs and lost earnings, but current and former employees and contractors at the Voice of America and at some of BBG’s non-federal entities, particularly Radio Free Europe / Radio Liberty (RFE/RL), continue to complain. Rather than diminishing, allegations of discrimination and arbitrary treatment of various classes of employees increased and employee morale fell as the agency was being run in recent years by a new group of career bureaucrats on behalf of the part-time board.

In 2013, Secretary of State Hillary Clinton, who was herself an ex officio BBG member, described the BBG as “practically defunct.” A former Democratic members of the BBG who prefers not to be identified said that a number of the agency’s crises in recent years are usually linked to an agency official who, however, always manages to avoid taking any responsibility and has never been held accountable.

Whether the new lawsuit or John Lansing will change the status quo remains to be seen, but his lack of experience in government service, his reliance on the existing bureaucracy and some of his recent personnel moves have alarmed rank and file BBG employees. They are afraid that he may be unable to shake himself free of career bureaucrats who have had effective control of the agency for many years.

Some outside observers had more faith, at least until recently. “I agree about the danger of relying on the lifers, but if he’s smart, he’ll have a good BS detector and develop his own perspective,” one of Lansing’s defenders said a few weeks before his latest personnel decisions were announced. “If he’s a good manager of people and of complex enterprises, and keeps his eyes open and doesn’t allow himself to be pressured into making any sweeping decisions too quickly, he could bring a useful outsider’s perspective,” his defender added.

According to a BBG-employed writer who wants to remain anonymous, “reading their names in Lansing’s announcement produced a lot of head-shaking” among BBG employees.

Employee morale at the federal part of the agency remains low. The BBG is regarded by employees as one of the worst workplaces in the Federal government. Members of the House Foreign Affairs Committee noted that “the annual survey conducted by the ‘Partnership for Public Service’ consistently ranks the Broadcasting Board of Governors at or near the bottom of all Federal agencies in terms of ‘overall best places to work’ and ‘the extent to which employees feel their skills and talents are used effectively’.”

In a bipartisan bill designed to restructure and reform the agency, lawmakers stated that “the consistency of these low scores point to structural, cultural, and functional problems at the Broadcasting Board of Governors.” BBG CEO John Lansing and BBG Chairman Jeff Shell are on the record opposing the key provision of the bill which calls for two boards and two CEOs to improve oversight and accountability of both federal and non-federal media entities currently overseen by the part-time BBG board.

Last year, the Office of Inspector General (OIG) conducted an audit and found that BBG had reportable violations of the Anti-Deficiency Act (ADA) by awarding contracts that were personal in nature, resulting in BBG exceeding its statutory authority to award personal services contracts (PSC). OIG found that PSCs were routinely awarded above BBG’s legislative limitation.

According to OIG, “Systemic failures occurred for a number of reasons, including but not limited to the absence of leadership within BBG to promote an effective procurement process, a lack of accountability for noncompliance with Federal regulations, and an environment in which some contracting officials were not able and/or willing to award contracts in accordance with Federal regulations. Collectively, these findings indicate that BBG is at extreme risk for fraud, waste, and abuse within its acquisition function, as well as the potential for conflicts of interest.”

During the same period, the Office of Inspector General (OIG) uncovered numerous other violations of government rules and regulations and waste of taxpayers’ money by the agency’s management. BBG Chairman Jeff Shell later said that many of these violations have already been dealt with and resolved. He took issue with OIG’s “ineffective leadership” assessment of the BBG.

In November 2014, Washington Post columnist Joe Davidson reported that the BBG’s International Broadcasting Bureau Chief of Staff Marie Lennon proposed in a memo to the BBG board that the agency use staffing firms as a solution to longterm violations of Federal contracting regulations.

In a Dec. 9, 2013 memo to members of the board, Marie Lennon, Chief of Staff at the International Broadcasting Bureau, the BBG’s administrative arm, said that using staffing agencies “would likely cost the Agency at least an additional 30 percent on average for each contractor due to overhead costs for the firm itself.”

Davidson reported that “more than 150 contractors sent a letter to BBG chairman Jeffrey Shell, with copies to 31 members of Congress, urging additional funding” for broadcasting and online reporting to strategically key countries, such as Russia, Iran, and China. According to one source, some full-time federal Voice of America employees also signed the letter to show solidarity with their colleagues who do the same broadcasting and journalistic jobs at much less pay and no benefits or employment protections.

“Instead, the agency seems to be attempting to sweep the issue under the rug by bringing in a third party middle man to be a buffer between employer and employee, and avoiding any redress for the apparent past wrongdoing.” From a letter of Broadcasting Board of Governors (BBG) Voice of America (VOA) and Office of Cuba Broadcasting (OCB – Radio and TV Marti) media content-producing contract employees to BBG Chairman Jeff Shell and members of the U.S. Congress.

The Washington Post article provided links to U.S. Government’s Office of Inspector General document and to internal BBG memos to illustrate the story, as well as links to BBG Watch.

Just last week it [BBG] began compensating people who were improperly fired in 2009 from the anachronistic Office of Cuba Broadcasting. Its [Voice of America’s] election night coverage three weeks ago was the target of derisive comments on BBG Watch , an online publication by current and former employees. Year after year, including this one, the BBG is a loser on key employee survey questions.

BBG Briefing Paper on Use of Contractors