In a Labor Day report about the iconic American labor and civil rights activist Dolores Huerta, who throughout her life has advocated for social change through non-violence, U.S. taxpayer-funded ($221 million in FY 2017) Voice of America (VOA) also gave a plug for Angela Davis, an American Marxist, a former leader of the Communist Party USA, who was prosecuted for purchasing firearms used in the 1970 armed take-over of a Marin County, California courtroom, in which four persons were killed, but was ultimately acquitted by an all-white jury.

THE VOICE OF AMERICA: “Through her social activism, Dolores Huerta also became an icon of the feminist movement. African-American activist Angela Davis says Huerta, a woman in a sea of men, energized the labor movement. She united the workers, she staged protests against discrimination and inspired African-American activists, men and women alike. ‘There was a time when rarely could you discover women of color who would identify as feminists because it was assumed to be a question simply of gender. And if it was a question simply of gender that gender was white,’ says Davis.”

The Voice of America report did not identify Angela Davis as a Marxist and communist who was a great admirer of the Soviet Union, was associated with violent political groups in the United States, supports the Castro regime in Cuba and remains a communist. BBC would have never left out such pertinent information.

The Voice of America plug for Angela Davis without disclosing her political background is quite ironic since she supported the governments of the Soviet Bloc for several decades, while VOA attempted to provide uncensored news to help the population of these countries, including the independent Solidarity trade union in Poland, to enable workers under communism to win the right to organize free labor organizations and to abolish the monopoly on power by the communist elites backed by the Soviet Union. In line with Ronald Reagan’s promise made in his Labor Day Speech at Liberty State Park, Jersey City, New Jersey, September 1, 1980, the Voice of America greatly expanded its programs to Poland as the independent Solidarity trade union led by Lech Wałęsa continued its struggle for labor rights, freedom and democracy.

While stressing the importance of free labor unions and democracy, Ronald Reagan added a plug for the Voice of America and Radio Free Europe:

RONALD REAGAN, Labor Day Speech at Liberty State Park, Jersey City, New Jersey, September 1, 1980: “Through our international broadcasting stations — the Voice of America, Radio Free Europe, and the others — let us send, loud and clear, the message that this generation of Americans intends to keep that lamp shining; that this dream, this last best hope of man on earth, this nation under God, shall not perish from the earth. We will instead carry on the building of an American economy that once again holds forth real opportunity for all, we shall continue to be a symbol of freedom and guardian of the eternal values that so inspired those who came to this port of entry.”

According to an entry for her on Wikipedia, Angela Davis was such a big hero for the Soviet communist leadership that in 1971, when she was accused of conspiracy in the death in the death of Judge Harold Haley, that the CIA estimated that five percent of Soviet propaganda efforts were directed towards the Angela Davis campaign. On May 1, 1979, Davis was awarded the Lenin Peace Prize from the Soviet Union. “She visited Moscow later that month to accept the prize, where she praised ‘the glorious name’ of Lenin and the ‘great October Revolution’.” Despite millions of people who were killed or died as a result of communism, Angela Davis is still not shy about her support for the violent and deadly ideology. Speaking at a conference organized by the Communist Party of Ireland in April 2017, Angela Davis, now a retired professor at the University of California, Santa Cruz, described herself as a “communist.”

In quoting Angela Davis for a report about a new documentary, Dolores, by filmmaker Peter Bratt, about American union leader and activist Dolores Huerta, who was never a communist party member and has always promoted non-violent social and political change, the Voice of America did not include any of the pertinent information about Davis’ Marxist and communist background or her longtime strong support for repressive communist regimes in the Soviet Union, Czechoslovakia, Cuba and elsewhere. Considering VOA’s history of broadcasting to former communist countries and the fact that some of its audiences are still forced to live under communism, this is a major material omission.

The U.S. labor movement, including the the American Federation of Labor and Congress of Industrial Organizations (AFL–CIO), the largest federation of unions in the United States, has always been strongly anti-Marxist and anti-communist. VOA’s foreign audiences need to know this. AFL-CIO was a big supporter of workers in former communist countries, including electrical worker Lech Wałęsa and the independent Solidarity trade union in Poland in the 1980s. As reported by Wikipedia, “in a New York City speech on July 9, 1975, Russian dissident writer, former Gulag prisoner and Nobel Prize laureate Aleksandr Solzhenitsyn told an AFL-CIO meeting that Davis was derelict in having failed to support prisoners in various socialist countries around the world, given her strong opposition to the U.S. prison system.”

ALEXANDER SOLZHENITSYN, “Communism: A Legacy of Terror,” AFL-CIO Event, New York City July 9, 1975: “There’s a certain woman here named Angela Davis. I don’t know if you are familiar with her in this country, but in our country, literally for one whole year, we heard of nothing at all except about Angela Davis. There was only Angela Davis in the whole world and she was suffering. We had our ears stuffed with Angela Davis. Little children in school were told to sign petitions in defense of Angela Davis. Little boys and girls, … 9 years old in schools, were asked to do this. Well., they set her free. Although she didn’t have a rough time in this country, she came to recuperate in Soviet resorts. Some Soviet dissidents — but more important, a group of Czech dissidents— addressed an appeal to her: ‘Comrade Davis, you were in prison. You know how unpleasant it is to sit in prison, especially when you consider yourself innocent. You now have such authority. Could you help our Czech prisoners? Could you stand up for those persons in Czechoslovakia who are being persecuted by the state?” Angela Davis answered: ‘They deserve what they get. Let them remain in prison.’ That is the face of communism. That’s the face of communism for you.”

The U.S. taxpayer-funded Voice of America, which failed to alert its U.S. and international audiences to Angela Davis’ Marxist and communist ideology, has been in a state of managerial chaos under its current Obama administration era leadership and that of its parent agency, the Broadcasting Board of Governors (BBG). Many of its top managers, editors and reporters are unfamiliar with 20th century history and therefore unable to counter Russian propaganda which uses extensively former KGB disinformation techniques.

Some visitors to the VOA website were astounded by a report posted on August 17, 2017 which suggested that the Marxist, communist and anarchist Antifa could be “arguably a group of human rights activists so dedicated they will risk life and limb to protect democracy“, even though the report acknowledged to a limited degree Antifa’s use of violence.

One person, who signed as Dan, commented under the report on August 20, 2017:

Antifa are as authoritarian and thuggish as their opponents, don’t confuse Anti Fascism with them.”

Dolores Huerta certainly deserves admiration for her non-violent activism on behalf of labor and women’s rights, but if the taxpayer-funded Voice of America is going to quote U.S. communist Angela Davis, it must follow the requirements of the VOA Charter and offer a full explanation as to who Angela Davis is and what she represents because at the very least she is a highly controversial figure.

In a Labor Day report, VOA should have mentioned Angela Davis’s support of communism, communist leaders and repressive communist regimes which for many decades have violated workers’ rights to organize. If the Voice of America is going to present Angela Davis as a model of human right and labor activism, it should note that communists have been responsible for millions of deaths due to executions, other forms of repression and self-created starvation. Communists imprisoned many labor organizers and they continue to oppress workers in countries like Cuba and Venezuela. The VOA Charter, which is U.S. law, clearly says that VOA cannot be one-sided in its reporting:

“1. VOA will serve as a consistently reliable and authoritative source of news. VOA news will be accurate, objective, and comprehensive.

2. VOA will represent America, not any single segment of American society, and will therefore present a balanced and comprehensive projection of significant American thought and institutions.

3. VOA will present the policies of the United States clearly and effectively, and will also present responsible discussions and opinion on these policies.” (Public Law 94-350) 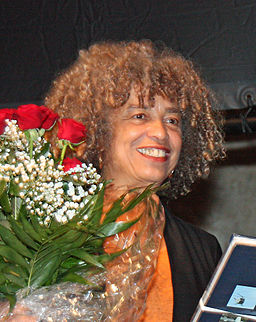