Acting Director of the Voice of America Yolanda López hopes to send a VOA correspondent to Afghanistan, has a tweet to the VOA report, “Iran Denies Link to Rushdie Stabbing,” and gives an interview to Federal News Network.

While it is true that “Iran Denies Link to Rushdie Stabbing,” as the VOA August 15 headline announced, there is a long-lasting link between the Iranian regime and the inspiration that Iran’s former and current theocratic rulers and their state media have provided for multiple threats to assassinate Salman Rushdie. The Iranian regime’s media produce a constant stream of propaganda messages in favor of terrorist acts directed primarily against Jews, Israel, and the United States. Without sufficient counterbalance and context, the VOA headline was deceptive. By failing to present and document a clear link between the Iranian regime’s propaganda and attempts on Rushdie’s life, the VOA text report amplified Iran’s misleading message, which was still offensive and threatening against Salman Rushdie. The video report, included in the VOA text, was better balanced, although not sufficiently, in our view. VOA Acting Director’s tweet focused on the VOA headline helped to give Iran’s misleading message additional credence.

According to Yolanda López’s bio on the Voice of America Public Relations website, she is a “native of Barcelona, Spain, [who] … started her career in broadcasting at a Telemundo affiliate in Irving, Texas, before joining the Spanish language television network Univision affiliates KMEX-TV in Los Angeles, California and WGBO-TV in Chicago, Illinois.”

Planning to Send a VOA Reporter to Taliban-ruled Afghanistan

López also made an announcement in a July 28 e-mail to Voice of America staff, indicating that the management hopes to dispatch a VOA correspondent to Taliban-ruled Afghanistan in the near future “to provide exclusive coverage on the Taliban’s return to power.” She also said in her e-mail that the VOA Afghan Service will “commemorate the one-year anniversary of the U.S. withdrawal and Taliban takeover of Afghanistan with a slate of special coverage… .”

Critics of the current management of the Voice of America and the U.S. Agency for Global Media (USAGM), including some former VOA reporters, believe that sending a VOA correspondent now to Afghanistan under the Taliban’s control would be extremely dangerous and irresponsible.

VOA and USAGM Management Failed to Evacuate Staff from Afghanistan

Federal government executives at the Voice of America and the U.S. Agency for Global Media, which manages VOA, have come earlier under criticism for leaving hundreds of USAGM contractors and their families stranded under the rule of the Taliban regime. VOA and USAGM executives apparently failed to see the coming demise of the U.S.-supported Afghan government, or have not planned for it. Some of these agency employees were evacuated during and after the Taliban takeover, but some USAGM contractors and their family members are believed to be still stuck in Afghanistan. Two decades of VOA’s heavy presence in Afghanistan could not prevent the Taliban’s victory. In the end, USAGM’s Afghan contractors, including those working for VOA, were left in a highly dangerous situation.

SEE THE WASHINGTON POST OP-ED: Opinion  The U.S. government left its own journalists behind in Afghanistan by Josh Rogin, August 31, 2021.

In an interview with Federal News Network published on August 18, Yolanda López said that she was placed in her current job as VOA acting director by USAGM acting CEO Kelu Chao.

Tom Temin: What is your current job now as acting director? I mean, it sounds like you’ve got the agency in your arms, maybe review what the agency does the new role of VOA and where it fits in the pantheon here?

Yolanda López: So yeah, I’m the acting director of the Voice of America. […]

But the thing is that what I’m focused on is in the fact that Kelu Chao, which is the acting CEO at [U.S. Agency for Global Media] gave me this responsibility, this opportunity. Kelu Chao is a great leader, is a role model to me. And I couldn’t say no to her. She told me if I could be the acting director and we both thought that it was going to be just for a few months, really. 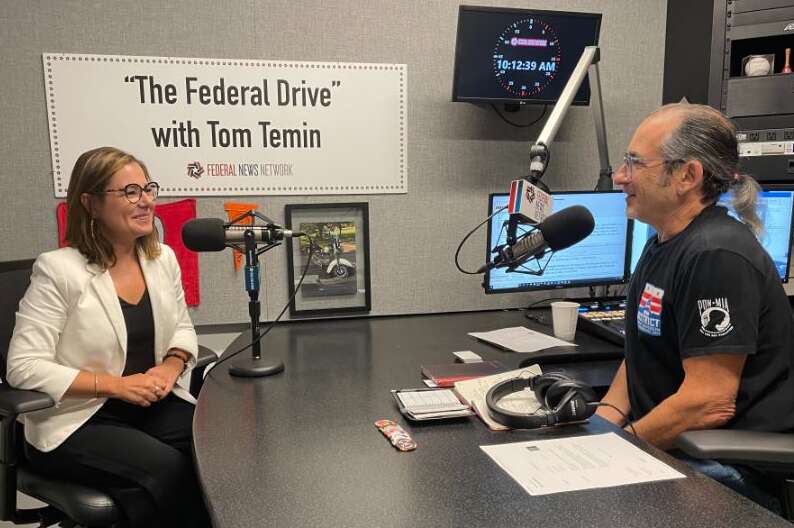 Voice of America acting director gets Sammies nod for turning around employee engagement | Federal News Network
Yolanda López is a finalist in this year’s Service to America Medals program and she joined the Federal Drive with Tom Temin in studio.

USAGM Still Third from the Bottom in Employee Morale

The U.S. Agency for Global Media saw its employee engagement score rise in 2021, as noted by Federal News Network. But the 2021 “Best Places to Work in the Federal Government” ranking for midsize agencies, determined by the “Best Places to Work” employee engagement and satisfaction score, calculated by the Partnership for Public Service and the Boston Consulting Group, still shows USAGM as being the third from the bottom–23rd out of 25 Federal agencies of similar size [some agencies have the same score]. VOA is the largest entity within USAGM. The agency has been at the bottom or near the bottom in the Office of Personnel Management’s (OPM) Federal Employee Viewpoint Surveys (FEVS) for many years under some of its recent and current USAGM and VOA senior executives and managers.

López and Chao were key members of what now-former VOA Director Amanda Bennett described as her “fantastic leadership team.” President Biden nominated Bennett to be the next USAGM CEO, and she may return to the agency if the U.S. Senate confirms her nomination. A full Senate confirmation vote has not yet been set. Chairman of the Senate Foreign Relations Committee, Senator Robert Menendez (D-NJ), and several Republican Senators have raised questions about Bennett’s performance at VOA.

While Bennett ran VOA with the assistance of her leadership team, critics reported or commented on numerous controversial events, including VOA airing Iranian and Chinese government propaganda without sufficient balance. VOA also hired a few journalists formerly associated with Vladimir Putin’s state media in Russia. One journalist produced prior to his VOA employment anti-American propaganda with conspiracy theories and antisemitic overtones. Another worked for Russia’s RT channel and reported for RT from Russian-occupied Ukrainian territory. More recently, in the period already after Bennett’s departure from the Voice of America, a Spanish journalist doing freelance reporting work for VOA was ordered by the Ukrainian authorities to leave Ukraine and was later arrested in Poland on suspicion of spying for Russia. The reporter and his supporters categorically deny the spying allegations, but he is still held under investigative detention.

As of the morning of August 20, VOA Acting Director Yolanda López’s August 17 tweet about Iran denying a link to Rushdie stabbing has two “likes.” Under the Bennett-Chao-López management team, the Voice of America has come under unprecedented criticism from Iranian, Chinese, Cuban, Tigrayan, and other refugee and immigrant communities in the United States for including without appropriate challenge propaganda from authoritarian and corrupt regimes.

One of several experts in Washington, D.C. following events in Iran, who along with Iranian American community leaders, has been highly critical of the way the Voice of America Iranian programs have been managed in recent years, commented after seeing the Iran denial tweet from Yolanda López and the VOA news report, to which her tweet linked:

“Unreal. The more things change at VOA, the more they stay the same.”

Iran’s Foreign Ministry on Monday denied any Iranian involvement in the stabbing of author Salman Rushdie.

A ministry spokesman told journalists that the [sic] Iran considers no one “deserves blame and accusations except him and his supporters.”

Rushdie’s agent said Sunday that while the author faced a long recovery, his “condition is headed in the right direction.”

An attacker repeatedly stabbed Rushdie Sunday as he was about to deliver an address on artistic freedom at the Chautauqua Institution in western New York state.

Hadi Matar, the man accused of attacking Rushdie, pleaded not guilty Saturday to charges of attempted murder and assault. He is being held without bail.

The 1988 publication of Rushdie’s book The Satanic Verses prompted Ayatollah Ruhollah Khomeini, Iran’s supreme leader at the time, to issue a fatwa to kill Rushdie and anyone involved with the book’s publication because the subject matter was deemed blasphemous to Islam.

A fatwa is an Islamic religious decree. While Khomeini has died, the fatwa remains in effect.

Rushdie lived in seclusion for about nine years after the issuance of the fatwa but has lived a more open life since.

Some information in this report came from The Associated Press, Reuters and Agence France-Presse