Richard Stengel’s October 29, 2019 op-ed in The Washington Post, “Why America needs a hate speech law,” has been criticized by free press advocates immediately after it was written, with new criticism emerging in the last few days after President-Elect Biden has appointed him to lead the transition at the U.S. government agency, the U.S. Agency for Global Media (USAGM), which is responsible for promoting free speech and free press abroad. USAGM’s largest media outlet, the Voice of America (VOA), which has a “Press Freedom” section, has ignored the controversy over Biden’s appointment of Stengel for a transition role at USAGM.

Former Time magazine editor Richard Stengel who as former Under Secretary of State for Public Diplomacy and Public Affairs represented Secretary of State John Kerry at meetings of the Broadcasting Board of Governors (BBG)–the former governing body of the agency which has been renamed in 2018 the U.S. Agency for Global Media–has been selected by President-Elect Biden to be the team lead transition volunteer for the USAGM agency review team. USAGM, which is an independent federal agency, oversees five networks: two federal organizations — the Voice of America and the Office of Cuba Broadcasting, which oversees Radio and TV Martí — and three non-profit organizations — Radio Free Europe/Radio Liberty, Radio Free Asia and the Middle East Broadcasting Networks — which receive grants from USAGM. Stengel is being criticized for his earlier call to restrict free speech in the United States by making “hate speech” illegal.

The Voice of America which has posted multiple news reports with criticism of Trump-appointed USAGM CEO Michael Pack has had nothing on Richard Stengel’s appointment by President-Elect Biden and criticism of Stengel’s Washington Post op-ed in favor of restricting free speech.

Joe Biden transition official wrote op-ed advocating free speech restrictions
Stengel, an Obama administration alumnus, wrote last year in a Washington Post op-ed that US freedom of speech was too unfettered and that changes must be considered.

An article in PJMedia by Robert Spencer was titled: “Biden Transition Official Believes the First Amendment Has a ‘Design Flaw’ — His Remedy Is to Curb Free Speech.”

Biden Transition Official Believes the First Amendment Has a ‘Design Flaw’ — His Remedy Is to Curb Free Speech
The destruction of the freedom of speech is an idea whose time has come, says Richard Stengel, Biden transition ‘Team Lead’ for the US Agency for Global Media.

Bad Arguments for Limiting Speech
The First Amendment is not a problem; it is a solution to many problems.

The First Amendment is not a problem; it is a solution to many problems, Conor Friedersdorf, staff writer at The Atlantic observed in criticizing Richard Stengel’s Washington Post op ed.

Earlier in his career, Stengel reported from apartheid South Africa, a place notoriously inhospitable to such freedoms, where he eventually collaborated with Nelson Mandela on his autobiography. You’d think that a man who worked so closely with the most famous political prisoner in the world would be the last person to advocate criminal prosecution of his fellow Americans for their expression. Yet that’s essentially what Stengel advised in a Post op-ed last week entitled “Why America needs a hate speech law.” Stengel never adequately defines what constitutes “hate speech,” because he can’t. The concept is inherently subjective. What you determine to be hate speech another may consider a legitimate argument worthy of debate.

Current USAGM CEO, Michael Pack, was nominated by President Trump and after a long delay when former Obama administration appointees were in charge of the agency during the first three years of the Trump administration, Pack was confirmed by the U.S. Senate last June in a largely partisan vote for a three-year term.

It is not clear that Pack can be forced to resign until he completes his three-year term. The bipartisan legislation which established his office and was signed by President Obama in December 2016 set the term of the first agency CEO to three years. However, according to an article in VOX, quoting Andrew Bates, a spokesperson for the former vice president’s campaign, Biden definitely wants to fire Michael Pack.

Stengel is an on-air analyst at MSNBC, a strategic advisor at Snap Inc., and a Distinguished Fellow at the Atlantic Council. His 2019 book, Information Wars: How we Lost the Battle Against Disinformation and What to Do About It, recounts his time in the State Department countering Russian disinformation and ISIS propaganda.

The following additional information about Richard Stengel is on the USAGM website:

Stengel has served as the managing editor of Time magazine since 2006, overseeing the magazine, Time.com, Time Books and Time for Kids. Stengel received the News and Documentary Emmy Award in 2012 for Time.com’s Beyond 9/11: Portraits of Resilience, on which he served as executive producer. In 2010, he was awarded Citizen of the Year at the Annual National Conference on Citizenship and the 2010 Lifetime of Idealism Award. He has also authored several books, including Mandela’s Way: Fifteen Lessons on Life, which has drawn praise from President Bill Clinton, Henry Louis Gates, Jr. and Deepak Chopra. 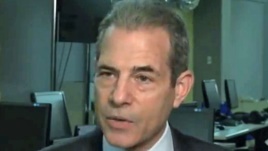